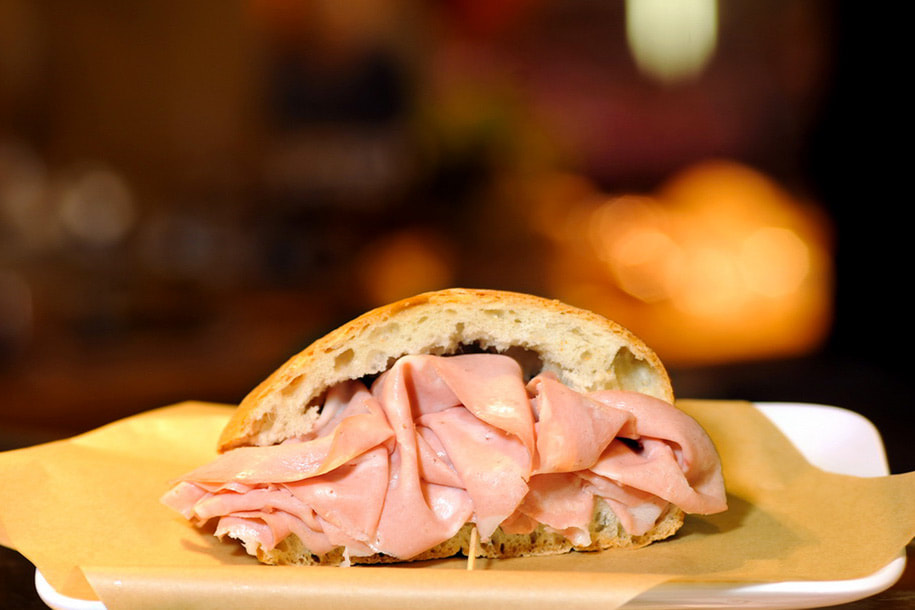 Let’s say it loud and clear: Bologna is not a city of street food. We prefer to eat slowly and with our legs under the table.
​
But how great would it be to walk around the 2 towers with a cone of fried custard in your hands?

​Check out this list of the most popular street foods of Bologna and where to eat them well made. 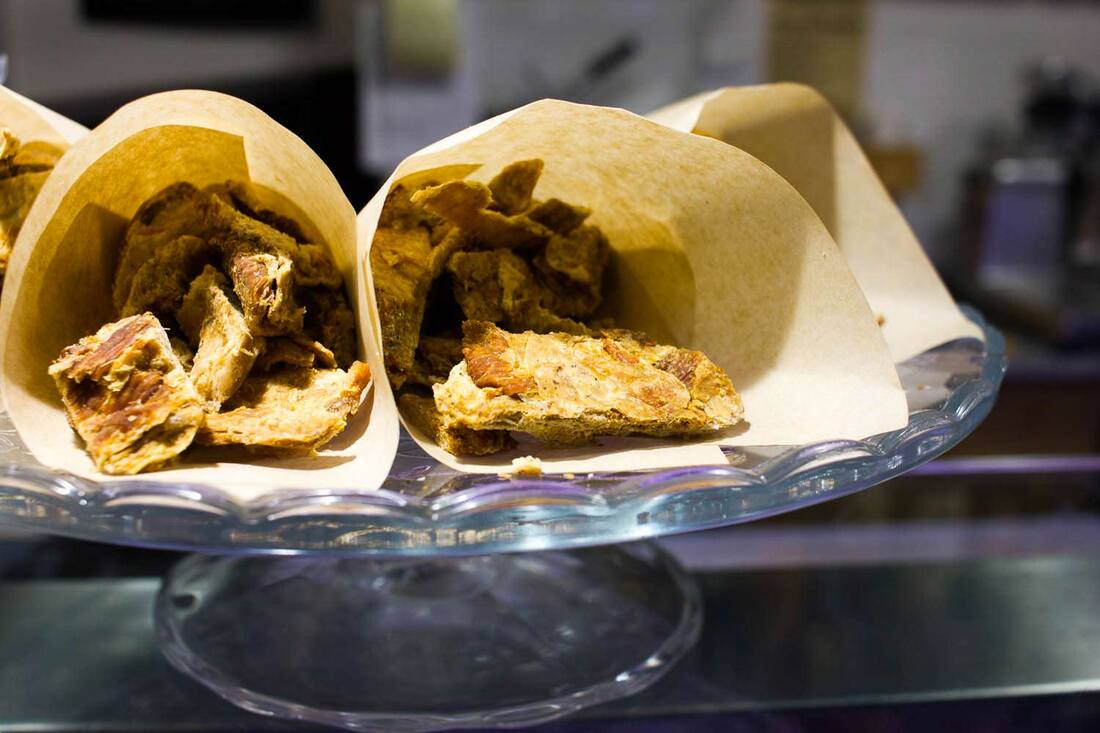 Repeat after me: not all that is fat is bad.
In the case of ciccioli (pronounce: tchèe-tchee-all-ee), pork fat is nothing else than delicious.

What are ciccioli made of?
It’s better not to investigate further.

Something like dried, pressed and spiced lard. All you need to know is that they’re not properly vegetarian, and the chances to get addicted to them are very high.

Where to eat them
You can find ciccioli in every salumeria the shape of a brown cake.
​At Romanzo, in the covered Mercato di Mezzo market, they’re ready to take away in a yellow paper cone. 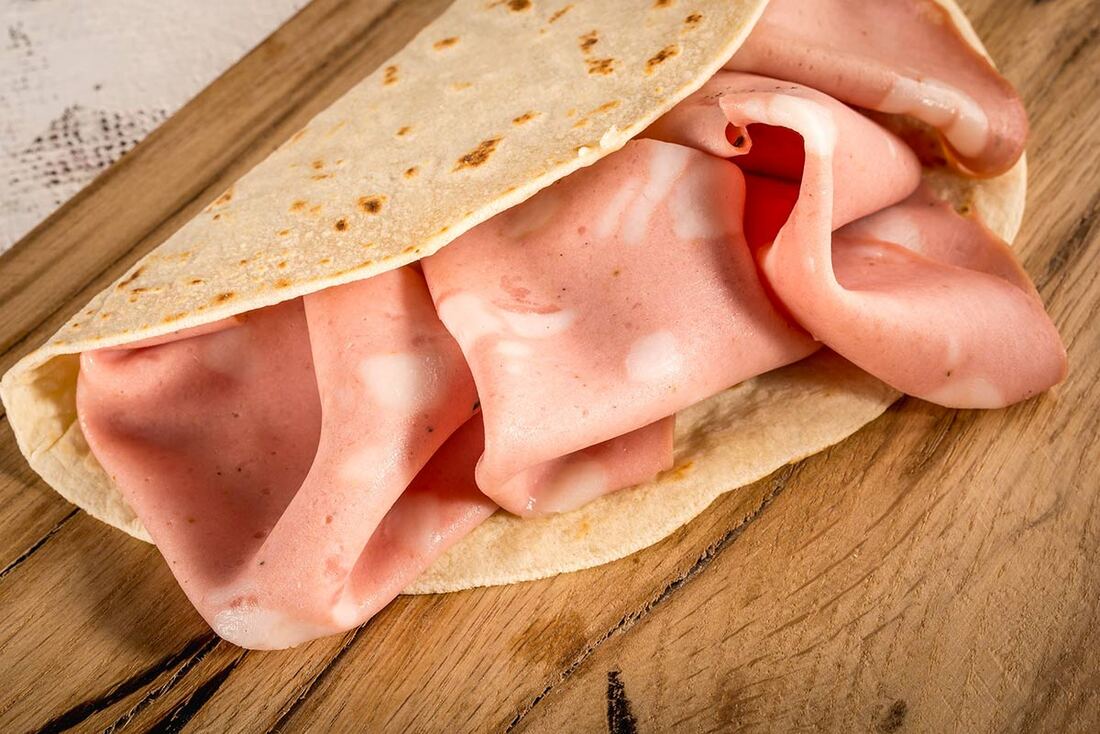 It looks like a taco and tastes like a pita, but with a special twist.
Do I have to tell what it is due to?
To the pork fat inside the dough, clearly. But sometimes it can be olive oil or even milk.

Piadina is an easy-made bread born on the beaches of Romagna.
It’s the bread of generations of bay-watches, the perfect snack to eat at 4am after a night of dance at Riviera, or just a delicious way to have a fast lunch.

Fill piadina with Parma ham, rucola and scquacquerone cheese.
But if you’d like to try something extreme go with sausage, grilled pepperoni and onion. It’s THE pre-football match meal.

Where to eat it
Piadina shops are easy to find, but only some of them are remarkable.
One of my favorites is Sfarinà, inside one of the best food market of Bologna: Mercato delle Erbe. They have a seasonal menu with a magical touch.
​And burrata. 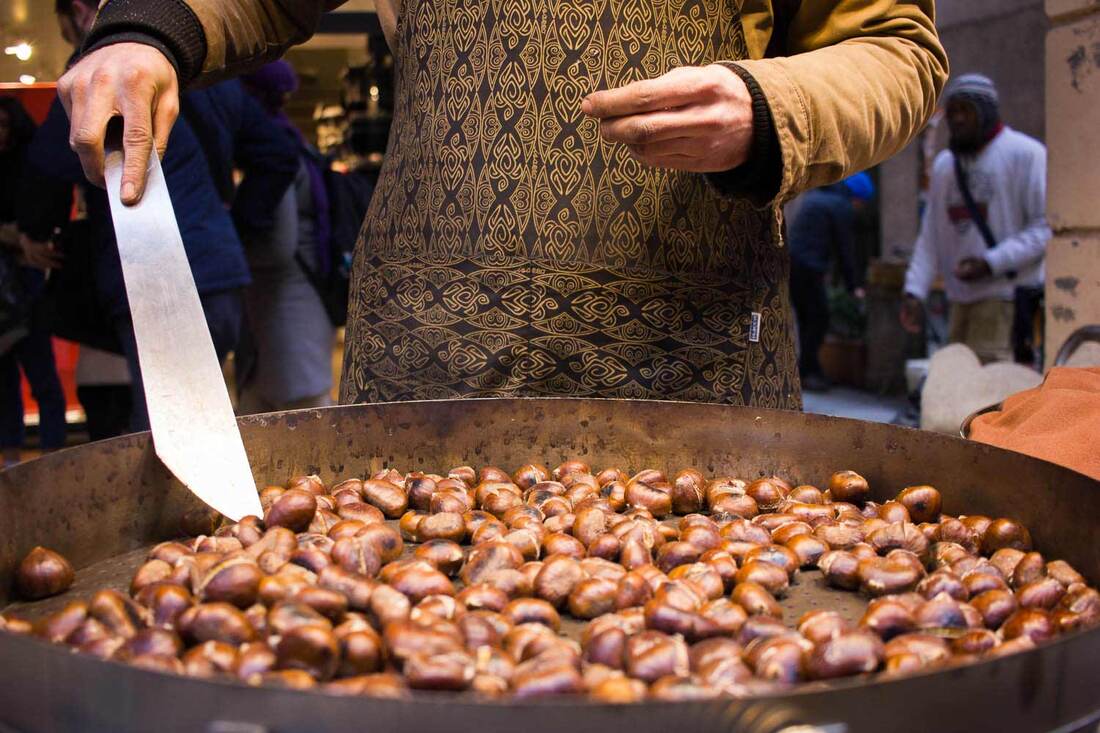 When summer is over, leaves are falling down, and I need blankets on my bed, only one thing can cheer me up: it’s caldarroste time.
​
Since October, small roasting kiosks appear in the streets, selling roasted chestnuts for a few Euro.

It’s hard to resist this temptation. So just don’t. Get a bag of hot caldarroste, eat them on your way home and remember: if you’re burning your fingers tips, you’re doing it right.

Where to eat it
Caldarroste kiosks are in the streets around Piazza Maggiore. I love the one in the corner of Piazza Re Enzo and via Rizzoli.
​
​If you’re lucky you can find other street foods made of chestnuts. Mistocchine and castagnaccio are less popular in Bologna but even more addictive. 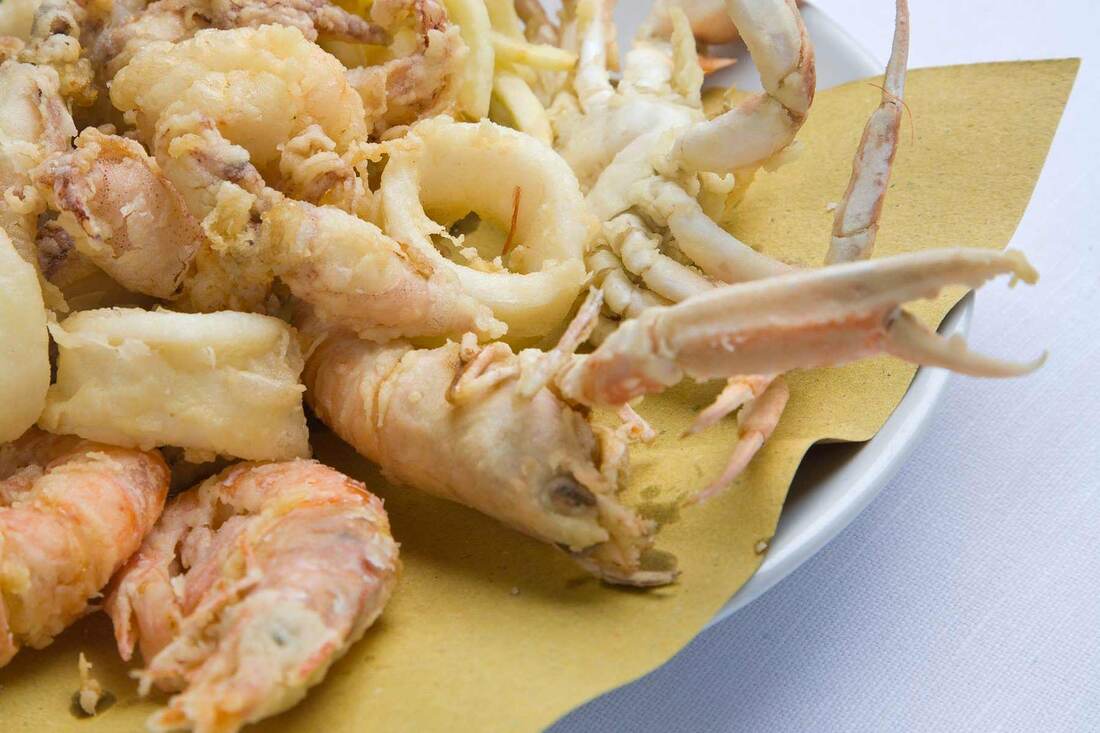 Fish never appears in Bologna’s traditional cookbooks.
We’re far from the seaside, so the traditional cuisine focuses on meat and dairy.

I found out there was a lot of fish in the city in the past. It was freshwater fish coming from Bologna’s canals. It was so abundant that they called it “the poors’ bread”.

Some fish has never disappeared. Fried small anchovies, for instance, have survived during the centuries.
They’re fried and sold in paper cones.
Eat them with all the head, bone and tail.
And please don’t squeeze lemon on it. Please.

Where to eat it
Pescheria del Pavaglione, in front of the old fish shops of Via Pescherie Vecchie, is perfect if you’re in a rush.
​Osteria Bartolini is one of the restaurants to eat great fish in Bologna. You can relax and snack on a bucket of fried fish under the oldest tree of the city. 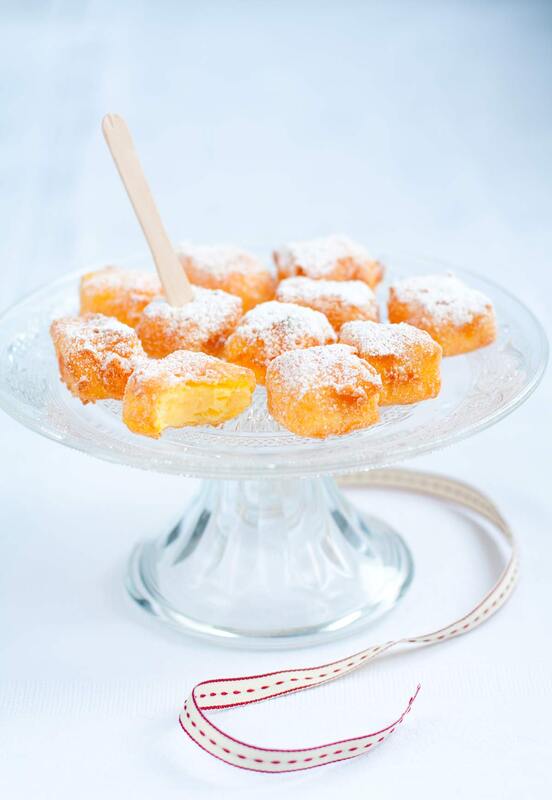 Crema Fritta is a small cube of custard cream with a light lemon scent. It’s sprinkled with a mix of flour, eggs and breadcrumbs, then fried in seed-oil.

In the big family of salty finger food, crema fritta is the strange creative sibling that never fights with anyone: sweet and a little bit of an outsider.
Only when it’s Carnival time and the crave for fried food intensifies, it’s possible to celebrate it properly by having a whole cone of it.

Where to eat it
Order a fritto misto in Bologna’s Trattorias: crema should be included. It’s a plate that mixes fried zucchini, meat, artichokes and some cheese as well.
​During Carnival time, the best bakeries of Bologna like Paolo Atti always displays whole trays of crema fritta on their window. 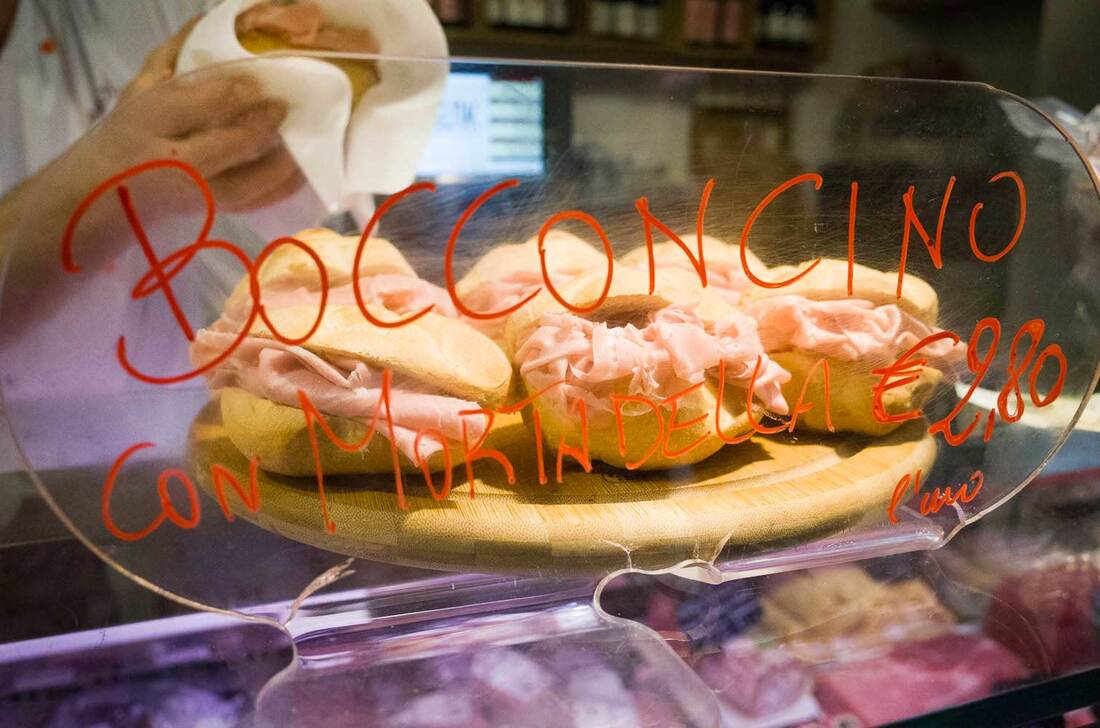 It’s a bit like love: if it’s true, you simply know that.
If you add many things to make it work, there’s something wrong.

Bread and mortadella: best couple ever. The perfect marriage is between a soft rosetta bread and a few slices of artisanal mortadella.

Undermine the couple’s balance with a glass of sparkling Pignoletto and see what happens.

Where to eat it
In Bologna is almost impossible not to get a Panino alla mortadella. Pigro, alongside San Petronio church, it’s the modern mortadella temple. Just, you have to be lucky and find it open: Pigro in Italian means lazy, and they take their name pretty seriously. 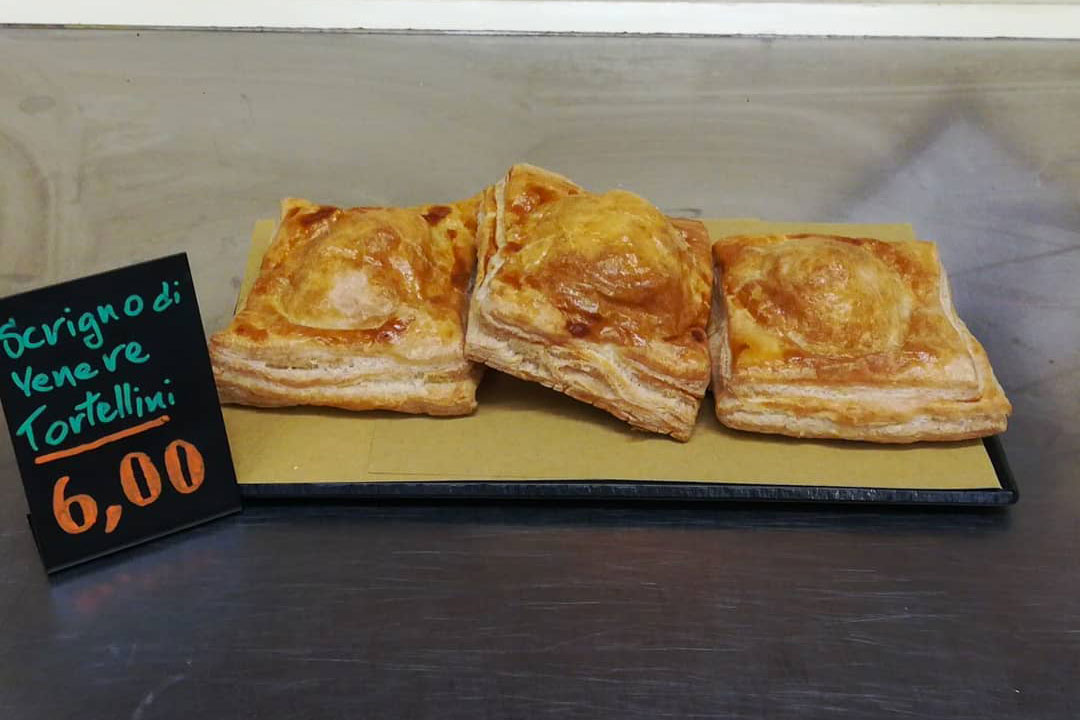 Tortellini is exactly the opposite of street food. The experience includes broth, spoons, grated Parmigiano Reggiano cheese, and – hopefully – a big family and lot of time to enjoy it.

But, believe it or not, sometimes even the tortellini have leftovers.

Like a phoenix, they rise out of their own ashes, the day after. They’re dried and closed in a puff pastry casket. The name of this small pie, scrigno di Venere (Venus’ casket), recalls a goddess, and for a reason.

Where to eat it
In Via del Pratello, among osterias, kebab shops and historical pubs, two guys opened a late-night-bakery. They sell pizzas, focaccia and everything else you could fancy after a few beers. Scrigno di Venere is available only in December, because – they say – their mum never kneads tortellini before Christmas time.