10 essential libraries you have to visit in Emilia Romagna

If there’s a place where you can find me after a food tour, this is a library. An oasis of silence in the desert of noise, to rest and recharge.

​Emilia Romagna is full of beautiful and hidden libraries. Here’s a list of my favorite ones to put on your travel list.

A fortress, a botanical garden, a basketball and boxing arena, a trading centre, a restaurant, a bank, a puppet theatre.
This is what Sala Borsa has been during its +2000 years of life.

Now it’s a library, probably the most important of Bologna. For its position sure, in Piazza Maggiore next to Neptune’s fountain.
​But also for the quantity and quality of books, magazines, music and more over 3 floors + a basement with the rest of a Roman street. 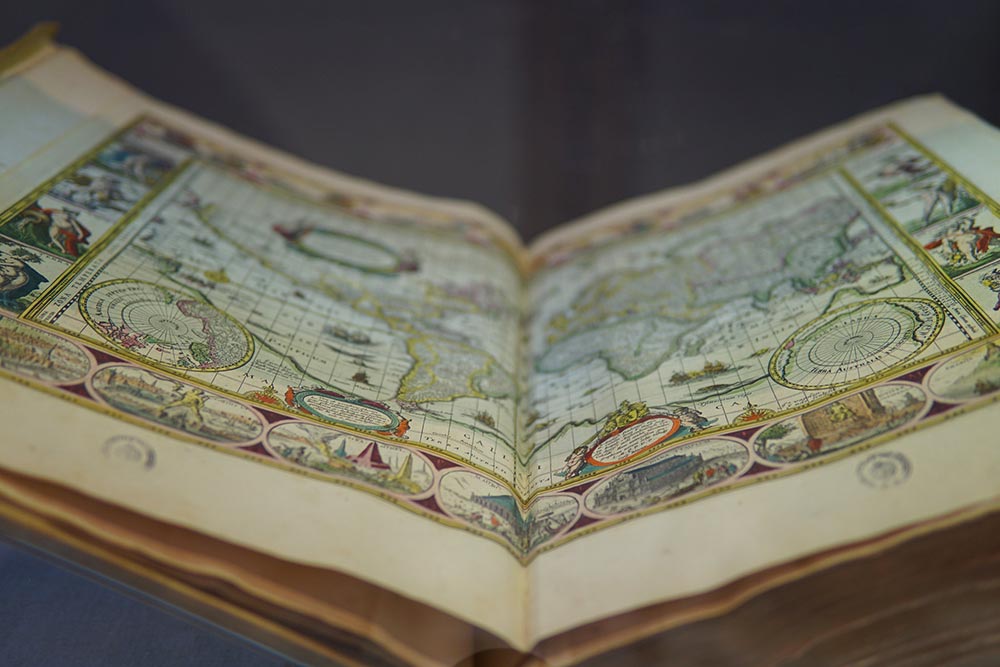 “I don’t like books, but I’d come here to read sometimes” said a rebel teenager during a school trip in Bologna.
Archiginnasio conquers even the hardest hearts.

A step inside the gate and you’d be back in a time where students from all Europe came to Bologna to study.

The library is on the first floor, a few steps from the astonishing anatomical theatre. 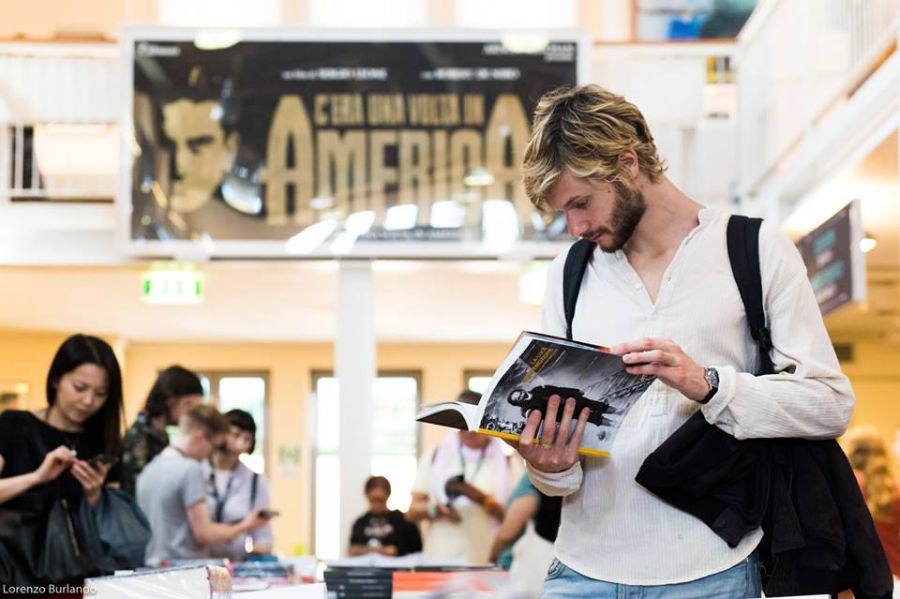 If you’re a cinema addicted like me, Bologna is the place to be.
Especially in summer when Piazza Maggiore becomes an open air arena.

But also everyday, if you have time to spend at Cineteca di Bologna and its library. A huge selection dedicated to cinema, photography and all their relatives.

​On the first floor you can find retrogames including my first console (Sega Master System II) behind a case.

Vintage movie posters on the walls may distract your study, but warm your soul. 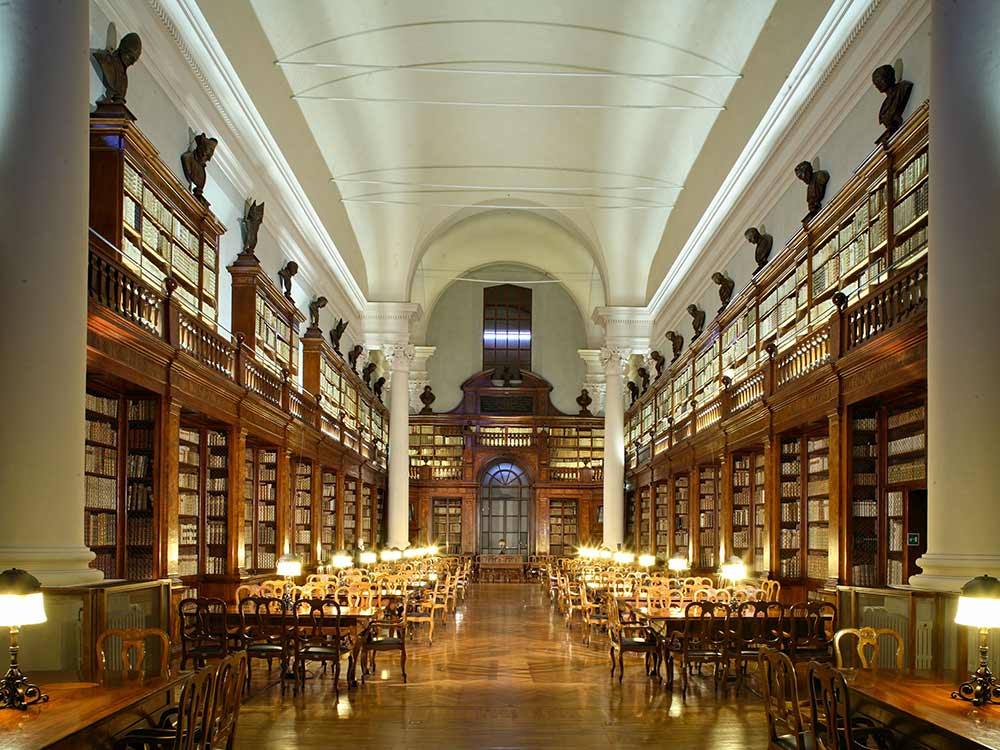 It’s set inside Palazzo Poggi, in the heart of University, since the XVIII century.
You can walk under its portico without notice it, but you’d miss one of the most interesting museums Emilia Romagna, an astronomical observatory and this beautiful library.

​If you want to breathe the authentic academic atmosphere of Bologna, don’t make the mistake to forget it. 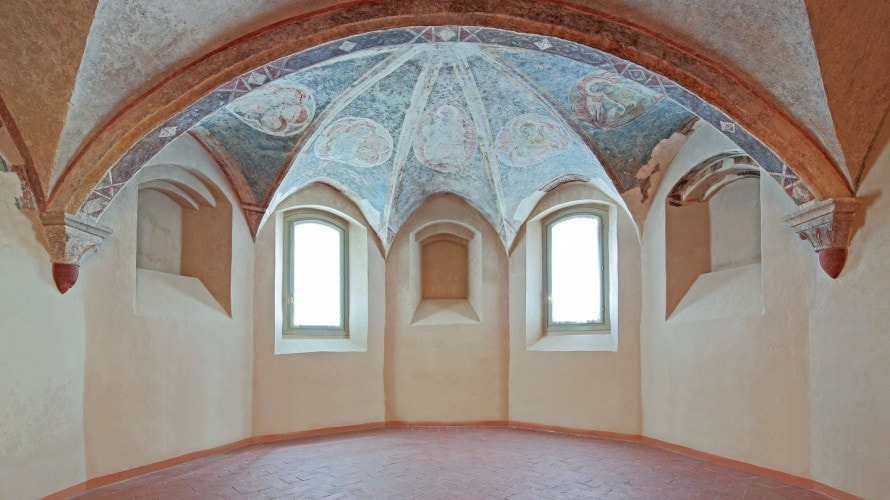 Mr Gutenberg had no doubts when he had to print his first book. Then it’s no surprise that the oldest libraries in Italy are set inside monasteries.

A XIV century Franciscan complex hosts this old library in Imola, a small city between Emilia and Romagna.

After this mystic jump, you deserve a pagan prize. Get a great gelato at Sesto Senso, just near the library.

​On the way back to Bologna, stop for a visit to Dozza, one of the coziest and charming village of all Emilia Romagna. 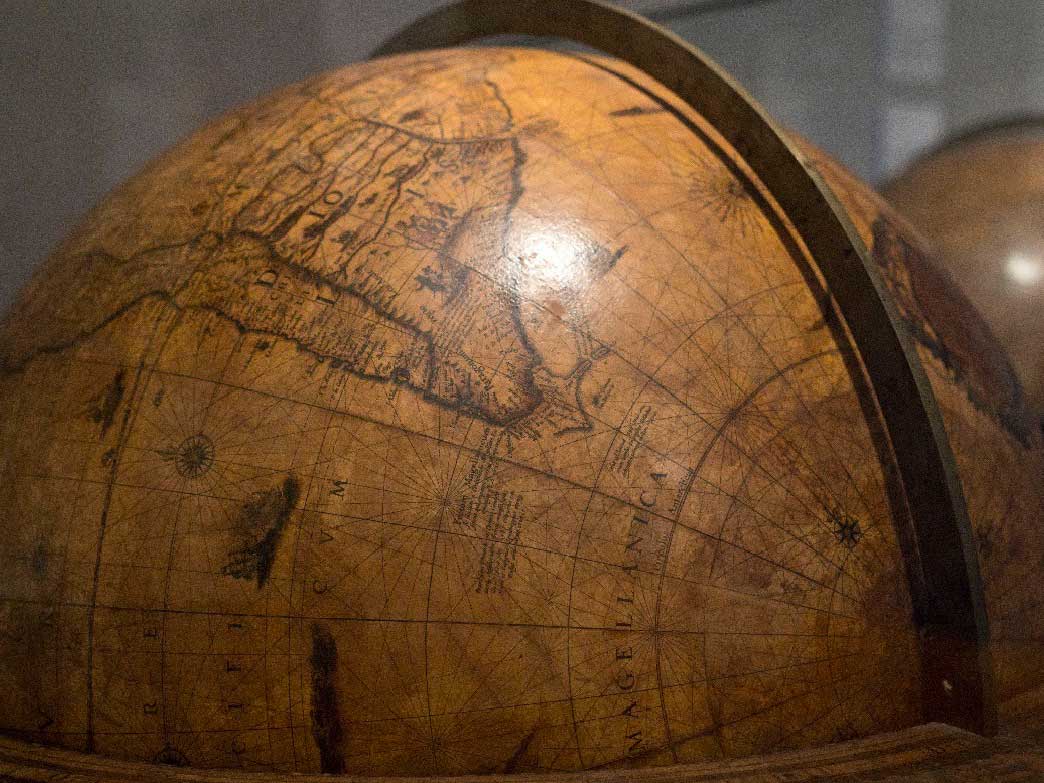 No dragons or direwolves, but until the unity of Italy, Emilia Romagna was an impressive Game of Thrones.

Biblioteca Estense takes its name from the noble family of Ferrara. When Modena became capital of the dukedom, the library changed location.

​Borso’s Bible is its best kept secret. A full gallery in a miniature book that took 6 years of work by masters of Italian Renaissance. 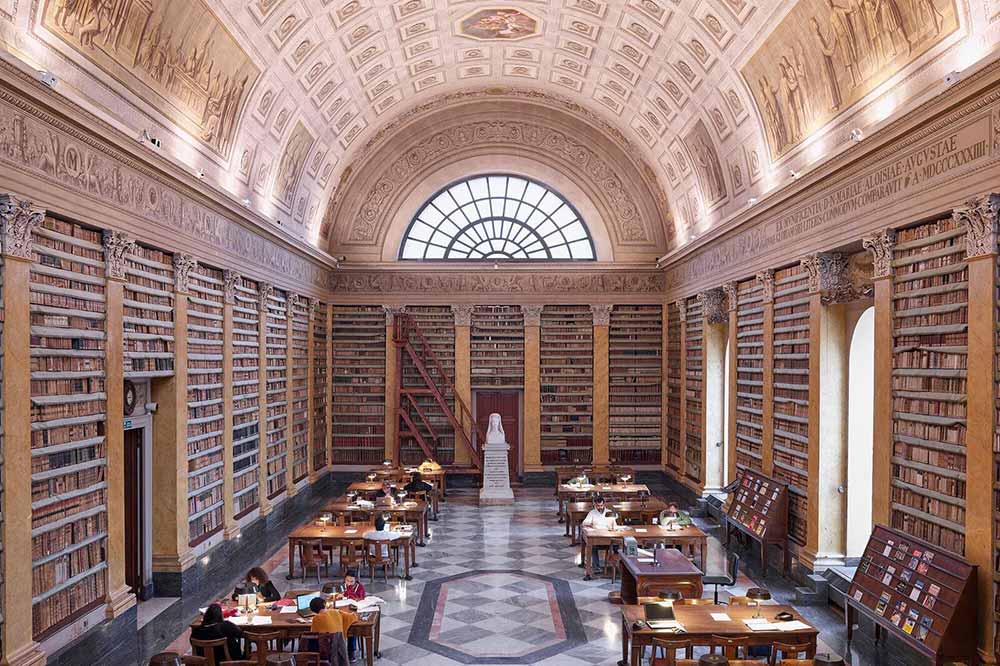 No excuses.
Visit Palazzo della Pilotta is one of the best things to do in Parma.

A huge wooden theatre, a surprising typography museum and a sketch by Leonardo, THAT Leonardo, aren’t enough to convince you?
Ok, Biblioteca Palatina will do the rest.

If you need to relax after the food feast of our Parma food tour, this is a great place. 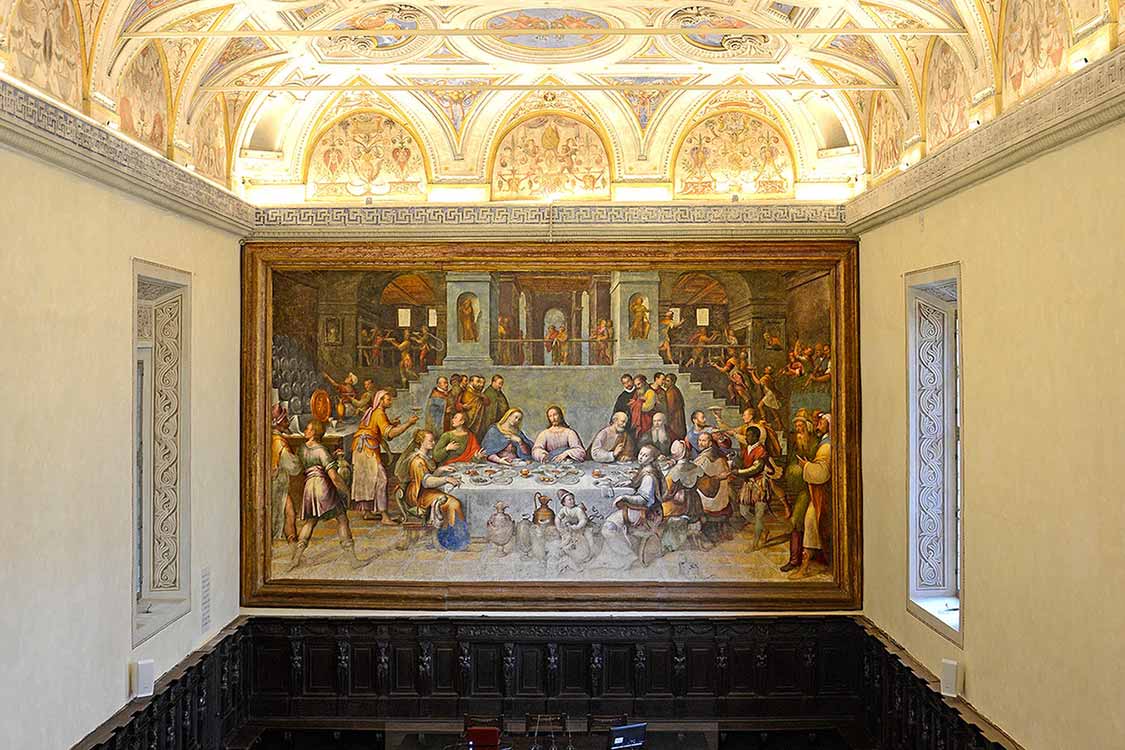 Another monastery, another unique library.

If you’re going to Ravenna only for its beach, you’ll get disappointed. But if you’re looking for art and culture, it’s one of the best day trips you can take from Bologna.

Monks spent about 300 years to built Biblioteca Classense.
Aula Magna, decorated with statues, frescoes and finely carved wooden shelves, is its jewel. Then visit the large refectory, the ancient sacristy (Sala Muratori) and the monumental cloisters.

The real gem?
​Raccolta Dantesca, the most complete collection of Dante’s works bought from the German bookshop Olschki. 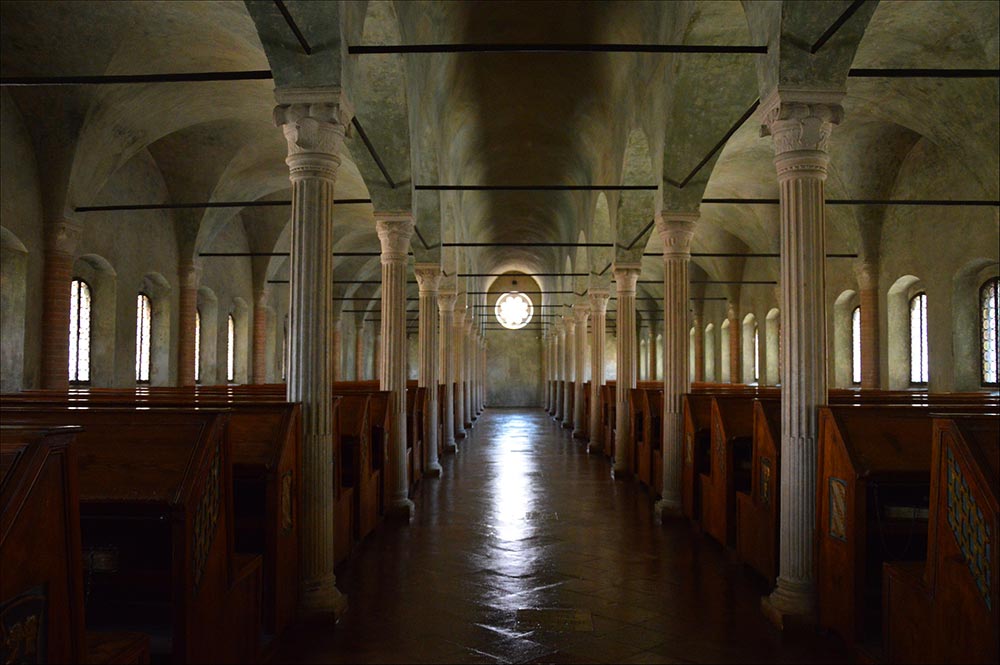 It’s written above the wooden gate of Biblioteca Malatestiana.
I can’t speak for the big mammal with the trunk, but I’m sure that this incredible library isn’t afraid of time.

It’s the first Italian civil library and the building, the books and the furniture are in perfect shape.
Credits to the architect Matteo Nuti, able to create an environment with a natural air recycle to preserve the books.
For this reason only small groups with guided tours can enter and for a short time.

​If you have to choose only one library from this list, this is the one. 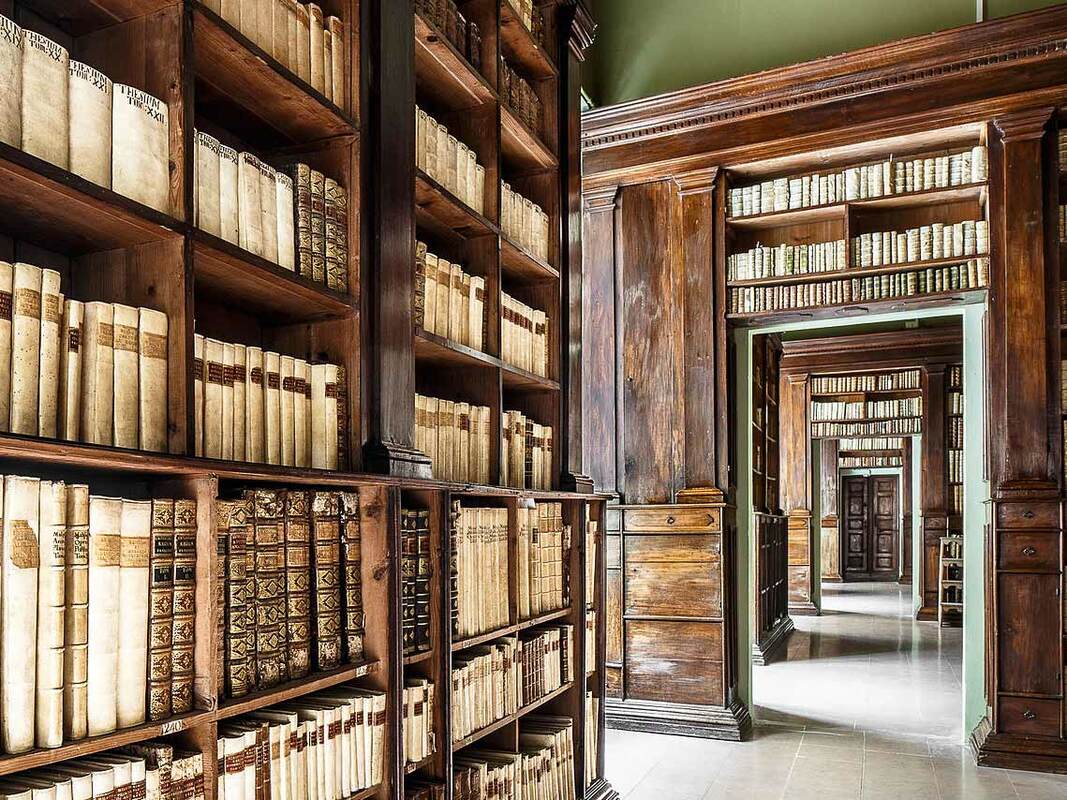 The name of Alessandro Gambalunga won’t tell you much.

Humble origins, law degree, married to a noble lady.
He gave to Rimini his family palace with a collection of Latin and Greek classic books.
But his legacy to Rimini goes beyond that.

At his death in 1619, he donated the full library to the city and left money for the improvement, binding and restoring of books and for the librarian wage.

​After 400 years the library still stands there in the centre of Rimini with more than 300.000 books. Only waiting for curious readers to look for them.

These are the libraries to put in your travel list. But every small city in Emilia Romagna has a hidden library. Now it’s your time to look for it.
[photo credits: Lorenzo Burlando, Davide Alberani, Ivan Ciappelloni]