10 independent bookshops of Bologna you should visit 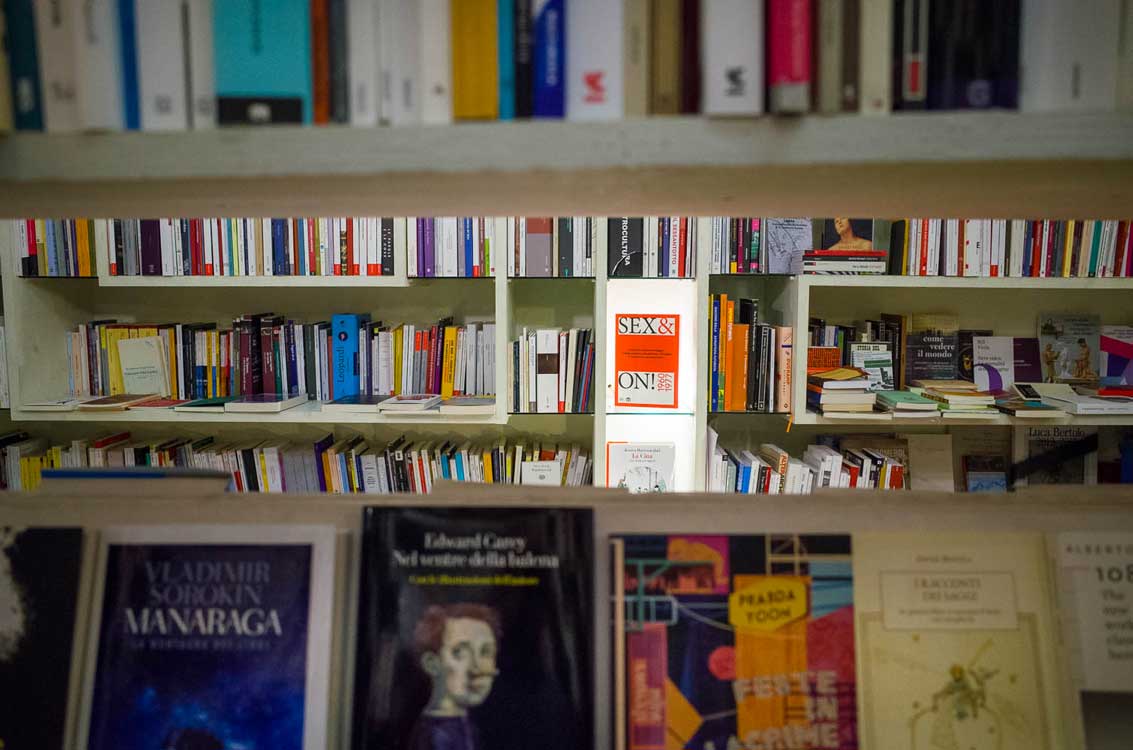 The quantity and quality of bookshops can tell a lot about a city and the people who live it.
Vintage librerie like Nanni or new format that combine books and food, like Modo Infoshop: here’s my selection of the most unique bookshops of Bologna. 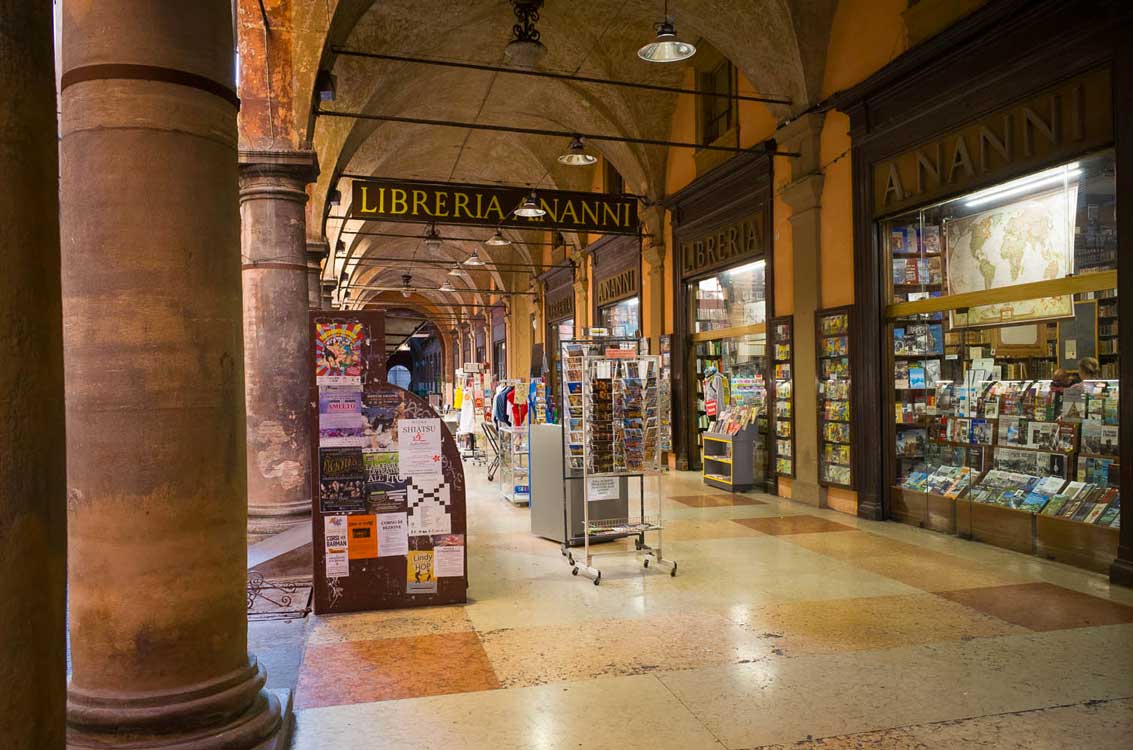 A few steps away from Piazza Maggiore and Quadrilatero food market, one of the most evocative portico of Bologna hosts Libreria Nanni. Opened in 1820, this book shop was loved by Federico Fellini and Pier Paolo Pasolini and it is considered a landmark of Bologna’s culture.

The wood panels under the portico remind of Paris’s bouquinistes and you can take a look to find cheap art magazines and novels. Inside you find books of architecture, literature, design, art, cinema and so many others. 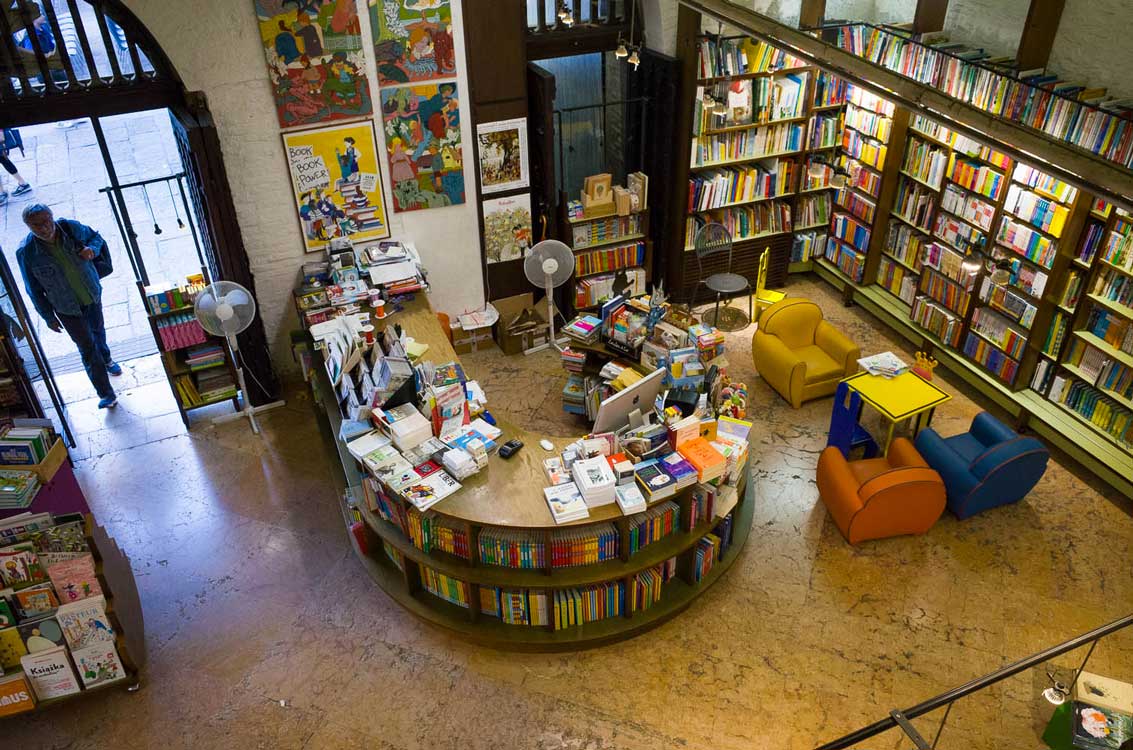 Right in Piazza Maggiore, set in the austere bricks of Palazzo Re Enzo, you find this bookshop with an evocative name and a multifaceted spirit.
Giannino Stoppani is the unfortunate protagonist of the famous children’s novel Gian Burrasca’s diary published in 1907.

It’s a bookshop specialized in kids books of Italian and foreign publishers.
Sometimes on the walls you can find art or comics exhibitions.

Opened in 1996, Alta Marea is a bookstore managed by dozens of women united in an association.
On the shelves you find books only written by women.
​
Most of the books are about politics and philosophy, in small quantity and from independent publishers.
They organize events and books presentations, making it the ideal place to meet and chat with friends. 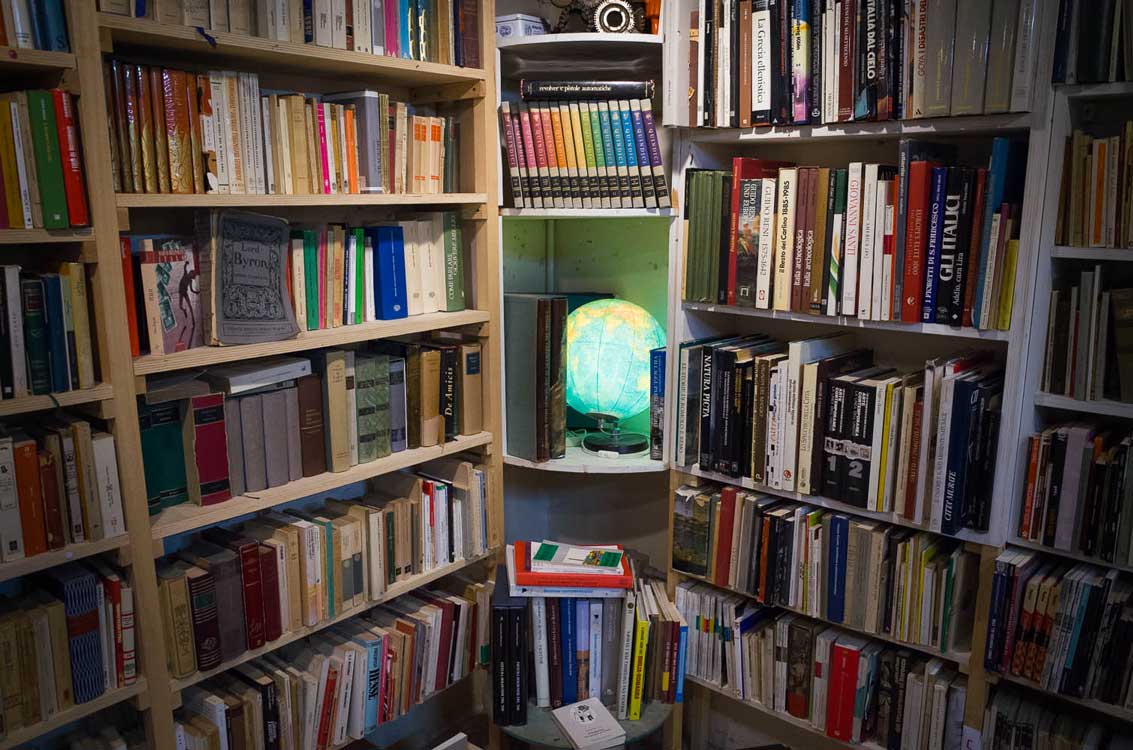 In Via Mascarella, a street of jazz clubs and good restaurants, you find Modo Infoshop.
It’s a space where you can leaf through comic and rare books, admire CDs and vinyl records and then drink a beer in the next room, the bar managed by the owners.

The opening hours allow you to spend a special evening among students and artists, in the spirit of art and alternative culture. 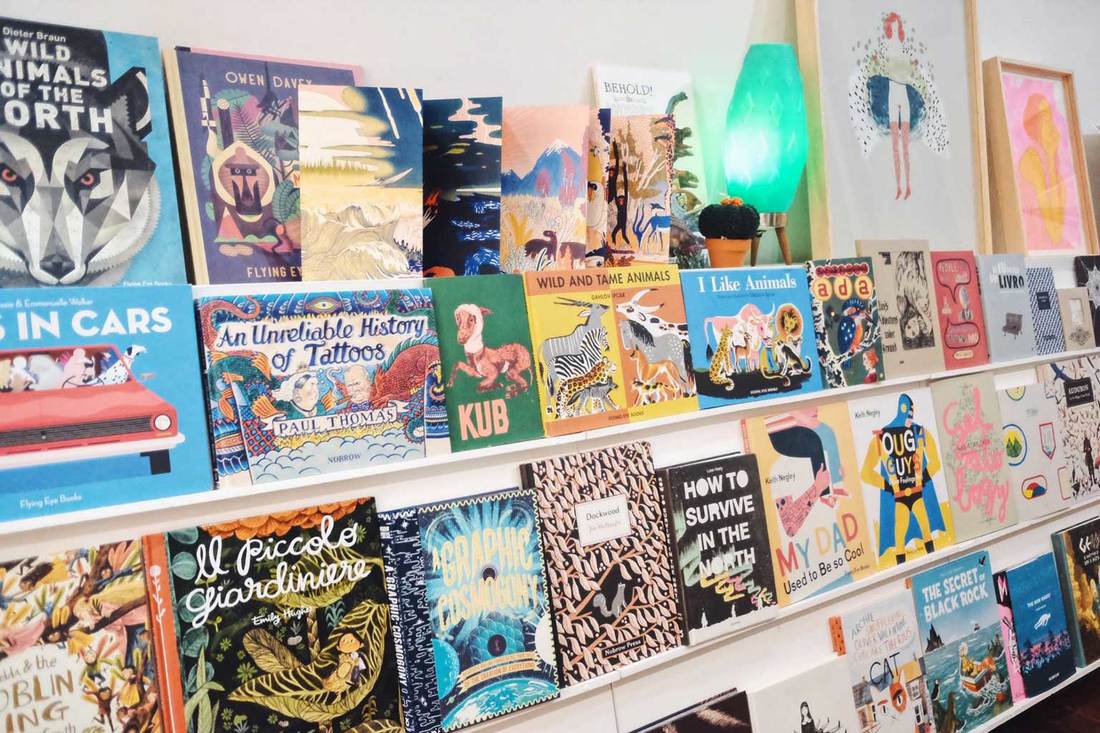 Amongst the Indian take-aways and pizzerias of Via Petroni, in the heart of the university area, you find Inuit Bookshop.
​This small library, founded in 2011, houses unique editorial products hard to find elsewhere. But Inuit is not a bookshop like any other.

It was born as a cultural association for the distribution of illustrations, comics, books, prints and fanzines, all from independent productions. You will also find there exhibitions, events and workshops dedicated to the fascinating world of printing.

If you called your cat Caravaggio and you know that Donatello isn’t only the purple ninja turtle, Leonardo bookshop is your place.
Set just next the art department of Bologna University, Leonardo is one of the few book stores specialized in art.
Design, photography, fashion books in an elegant location.
​
And after this jump into culture if you walk a few steps ahead you will taste one of my best gelato of Bologna. 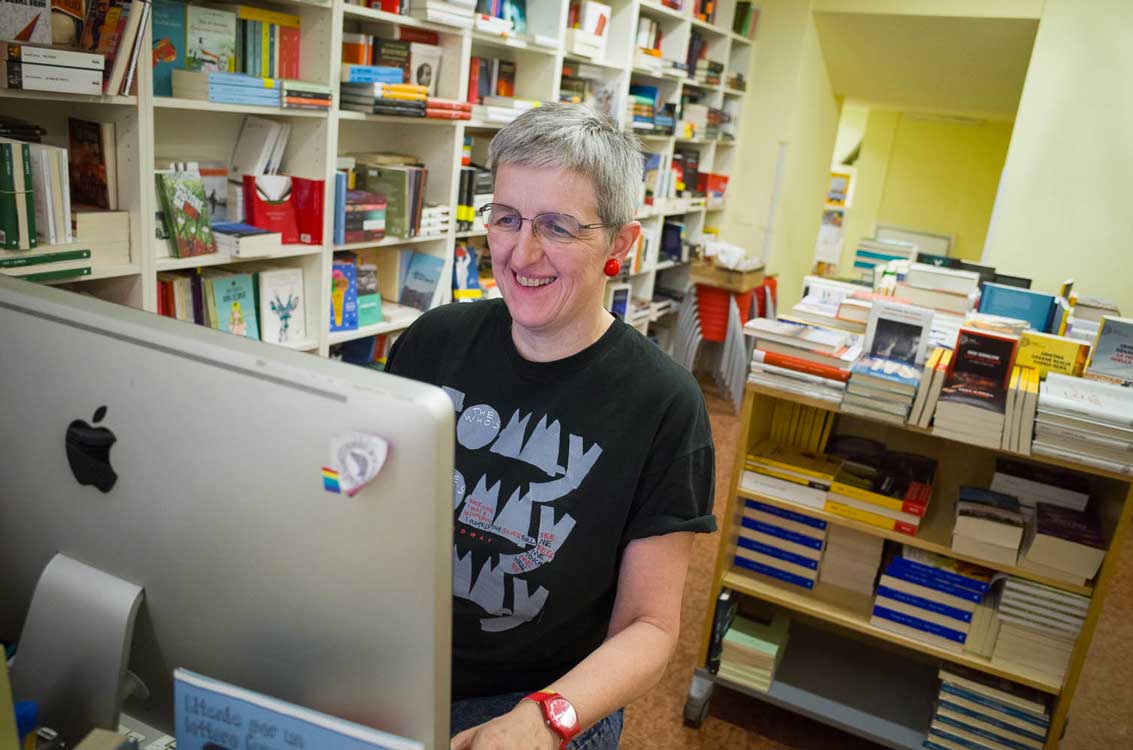 Hospitality is the best word to describe this bookshop.
Not only for the pleasant and tidy environment, nor because you can relax in the reading room.
But above all because of Nicoletta, the bookseller, who knows how to make everyone comfortable with her book advices, cooking tips and political discussion.

Visiting Trame doesn’t mean just buying a book; it’s an opportunity to get to know and exchange opinions with an interesting person. 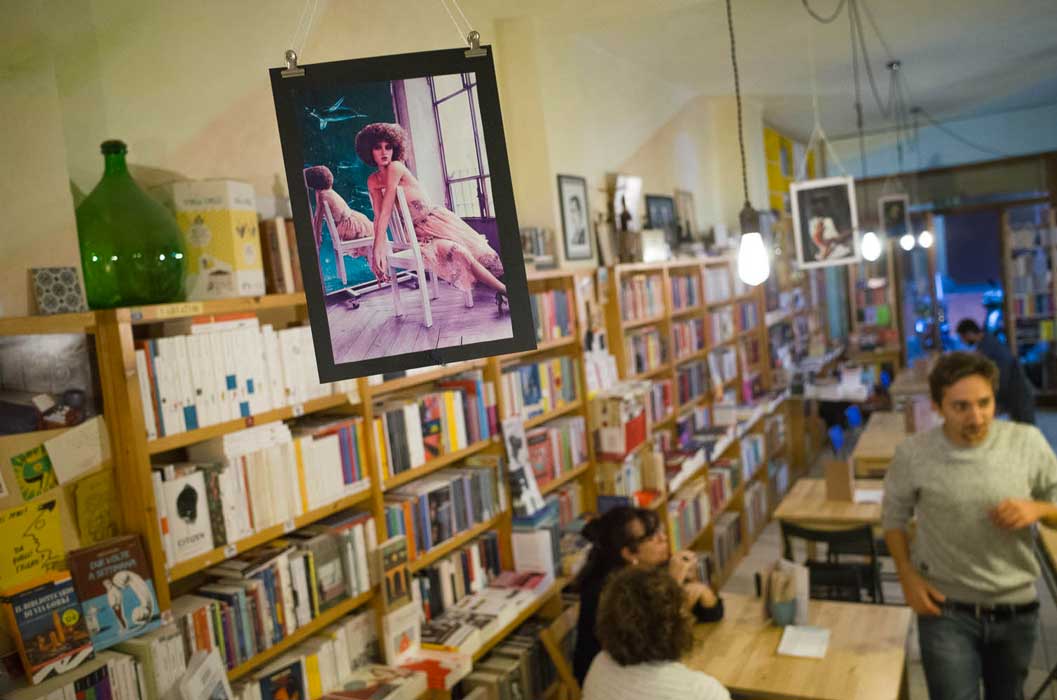 Giorgio and Antonio are from Foggia, Puglia, but like many University students, they decided to live in Bologna after graduation.
The name of their cozy bookshop in Via Cartoleria is inspired by “The Brotherhood of the Grape”, a novel by John Fante in which wine and literature are combined.

There you can find reading and lectures by foreign and Italian artists, as well as acoustic concerts surrounded by books.
At La confraternita dell’uva you can also have aperitivo with delicacies made in Puglia: from taralli to cheese, preserves, olives and beers. 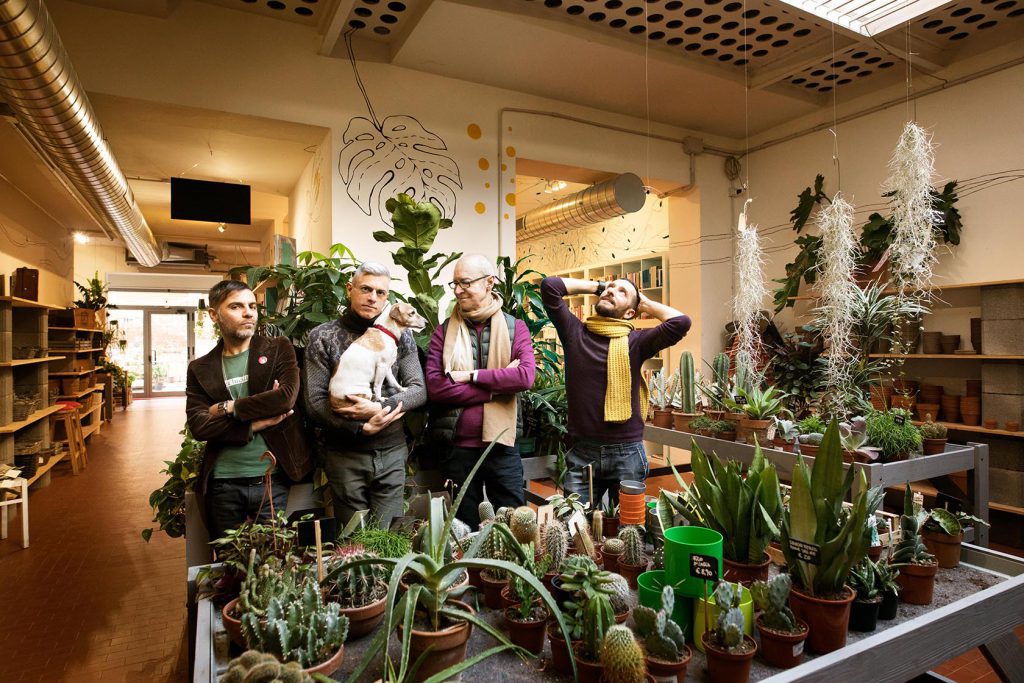 A nursery to create your home garden?
A place to get a drink watching photos and art exhibitions?
A gay-friendly bookshop with LGBT books and dvds?
​
Igor, which take the name by the owners’ dog, welcome you in a space that is all those things.
Founded by Raffaele and Gianluca in 2007, now Igor is hosted at Senape, a nursery in Bologna city center which is also a reference for the LGBT community.

Take a walk outside the traditional routes and get to the University area. Between students who move through the departments and who have a coffee in the Jewish ghetto, you will bump into this unique small bookshop.
​
Ivan, the bookseller, created it in 1989 to build a space where you can share opinions, ask for suggestions and discover hidden and out of print books about music, cinema and theatre.

It is located next to Osteria dell’Orsa where you can have a dish of tagliatelle in one of best budget restaurant in Bologna browsing your new favorite book.
​
Via Mentana, 1, 40126 Bologna
Tel. +39 051 237277
www.libreriacinemateatromusica.com